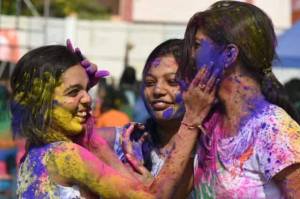 Holi is a colorful festival celebrated with great joy amongst the people of Hindu origin in Nepal. Holi festival in Nepal falls on the full moon day of Falgun as per the Nepalese calendar hence also known as the “Fagu Purnima”. Fagu refers to the month of Falgun and Purnima refers to the full moon day. Holi festival in Nepal is celebrated as a symbol of victory of good over the evil. As per the Hindu mythology, Hiranyakaschapu, an evil king tried to kill his own son – Prahlad because he was a devotee of Lord Vishnu and worshipped Lord Vishnu every day and night. Hiranyakaschapu warned his son not to worship Lord Vishnu but to worship him as he is the powerful person in the world. He had been blessed with the boon of immortality. However, the innocent child Prahlad denied his father and continued worshipping Lord Vishnu. Hriyanyakaschapu, empowered with arrogance decided to kill his son. Therefore, he called his sister Holika to kill Prahlad. Holika had been blessed by Lord Brahma that fire would never burn her. Therefore, she took Prahlad in her lap and sat on a pile of hay. Hriyanyakaschapu set fire on the pile of hay. Innocent Prahlad, even in that condition worshipped Lord Vishnu without any hesitation. As a result, the power of devotion gained victory over evil. Holika was burned into ashes but nothing happened to the child – Prahlad.

Holi is celebrated to mark this particular day of victory of good over evil. Even the name Holi comes after the name of Holika, the sister of Hiranyakaschapu. There is a ritual performed on this day which is also known as Holika Dahan. In Holika Dahan, a fake Holika is made and burnt in the fire. Holi festival in Nepal also marks the arrival of spring season. People play with colors and water. Friends and families gather together to play colors. They use different colors and splash the colors over each other. They throw water, eat, dance and enjoy the festival with great joy. The festival is also known as the festival of colors. The whole environment becomes colorful and vibrant on this day. People use water guns, water balloons to splash water over even other. People painted with colors roam the streets with music on. They dance shout and relish the vibrancy in the air.

Generally, the youngsters gather around in the Kathmandu Durbar Square and enjoy the festival. On the day of Holi, Kathmandu Durbar Square is packed with people celebrating Holi. If you are visiting Nepal anytime between February to March then Holi celebration in Nepal is a wonderful attraction not to be missed. Do not forget to buy a white t-shirt especially for Holi because Holi is a festival of colors. Make up your mind that your clothes will be ruined after the festival.

Here are some tips for you if you are planning to play Holi in Nepal.

Even the Holi festival in Nepal has its dark side these days. Some youngsters have brought bad activities to this culture. In the recent past, many people especially guys used to splash water over girls even when the girls were not interested in playing Holi. Holi had become an act of teasing for guys and girls were the sufferers. Hence, government has passed a rule that if anyone splashed water or color over the people who are not interested in playing, they may end up paying fine or going to jail. Hence, be careful and play Holi only with your group. Another negative aspect, youngsters may mix intoxicating substance called – Bhang in foodthe be careful about the food you eat randomly that day.

If you are visiting Nepal somewhere between February to March and would love to be a part of Holi festival, let us know. Nepal Intrepid Treks arranges dates for you so that you will be able to enjoy this colorful festival with us. This year Holi festival lies on 1st March in Kathmandu and 2nd March in Terai 2018.